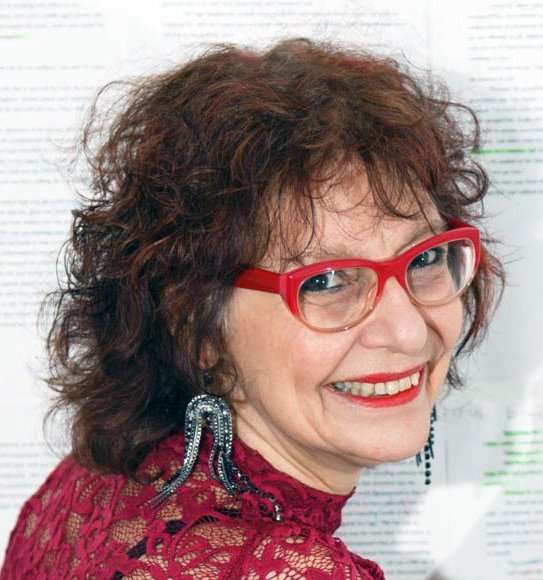 To Spain in a powerchair! An interview with writer Lynne Blackwood

I’ve known Lynne Blackwood since we were at school together, but then there was a big, big gap – from when she moved away from Salisbury in 1968 to her return to England about 35 years later.  In between, she’d had three children and travelled the world, gathering experiences she’s more recently put into words through short stories, poetry and her novel, Rings of Chalk.  And now she’s off to Spain – but not before I got her to answer a few questions!

Tell me a bit about your life story so far

Where do I start?  Many tragedies, ups and downs, but I always forged ahead despite them, thanks to my Anglo-Indian father and the wonderful upbringing he gave me.  I’ve spent 25 years in France and I’ve worked in the former Soviet Union.  Yet despite two broken marriages, and being limited by four walls and a wheelchair, I still have an unquenchable thirst for adventure.  I have so much more to do and say – enough to fill six memoirs of my life so far!

Losing my career and falling ill several years ago was a blessing in disguise, tough as it was, because it gave me time to start writing again.  I’m still curious about everything, and I’m passionate about most things – especially justice for the disadvantaged.  I can identify with people – that’s why I can get into the heads of my characters to transcribe their emotions in my writing.  My brain is like a hard drive, storing everything – so I’ve many more stories to tell when I have time to!

Through grants from the Arts Council, I’ve been able to work with some great mentors, and attended events and master classes.  I’m now part of the INSCRIBE national programme, and preparing some of my poetry for publication.

A collection of my short stories is going through its final edit, and my crime novel, Rings of Chalk, is currently with an agent – fingers crossed!  Three years of hard work is paying off – commitment, dedication, sweat and tears – oh, and pots of coffee and the odd glass of wine!

The main character in your novel Rings of Chalk is a Georgian detective called Lali – and she’s an unconventional heroine.  What inspired her creation?

That’s a funny story because I never thought she’d end up on the last page of a novel!  The idea came four years ago when I was chatting with my husband, who’s Georgian.  I’d just attended my first creative writing workshop and my brain was on fire!  He said I should write about Georgia and it just went on from there – even though I didn’t think I had the skills to write a full novel.  The plot came quickly and ‘Lali’ appeared, influenced by my work with women who’d fled Russian soldiers and mercenaries when Georgia tried to break away from the then-Soviet Russia.

It was a horrific time, and I’d seen the aftermath, the psychological impact on Georgians.  My husband helped with names – Lali comes from Abkhazia so her name had to reflect the Russian-occupied region.  She appeared, in my head and on paper, like a film going through my brain.  I wanted her to be disabled and damaged by her experiences because I wanted her to be a fighter, a brave woman in a man’s world, the cultural and social context adding depth to her character.

Your writing’s very varied – short stories, poetry, novels – do you have a preference?

Actually, no.  I love writing in these different forms.  Writing short stories, for instance, is like a quick-fix breath of fresh air between the more intense work of writing poetry and novels.  At the moment, I’m in poetry-writing mode because I’ve spent so much time on my collection, but I also have lots of ideas for other genres of novel.  I’ve begun one that’s magical realism and one that’s a mystery thriller.  Needless to say, the plots are all mapped out with characters.  And Lali’s next adventure is in the plotting stage – just in case (wild hope!) I get a three-book deal!

Have any writers influenced your own work?

I have some favourites but honestly I don’t think they’ve influenced me.  After 25 years in France, in a bit of a cultural void, I’ve got a lot of catching up to do – my eclectic tastes range from Jesse Burton’s The Miniaturist to Kevin Powers’ The yellow birds. As long as it’s well written and tells the story of an interesting character, I’m open to anything.

Recently, I’ve been reading crime writers such as Finland’s Kati Hiekkapelto – a very strong social commentary underlies her books – and Iceland’s Ragnar Jonasson, who creates extraordinary atmosphere.  Another favourite is Henning Mankell.  I need books that I’ll remember for a long time afterwards.

And your latest project is Powerchair Flamenco!  That sounds like a real challenge!

Oh it is!  The major challenge is organizing the complicated logistics of travelling with a wheelchair – and funding the horrendous additional costs involved.

I’m very lucky that my friend, PR guru and fellow writer Amy Solis just happened to be available to support me.  She’ll be filming me as well as helping with my blogs and vlogs – which is quite wonderful.  I’ve always loved flamenco dance and song, so this is a dream come true.  We’ll be going to Jerez de la Frontera for eleven nights, then to Seville for two nights before returning home.  This ‘writing retreat’ has developed into an important project which will help me secure more funding to achieve my goals next year – if I can increase my followers.  I’m hoping other creative people with disabilities will be inspired by what I’m doing.  So, sign up to my website for regular updates, and/or follow me on Twitter @leblackwood #PowerchairWriter.

What’s in the pipeline?

I need to complete the final editing of my short story collection, then submissions.  Publication in magazines – I’m waiting to hear from the St Petersburg Review and Sable Litmag. I’ll have a go at some competitions – put on hold this year! – and continue to raise the bar for my poetry.  I hope to find time to finish my magical realism novel, set in Paris, but I may be very, very busy!

On the back of the #PowerchairWriter trip, I’m hoping to develop more podcasts and video readings of my work, to put onto the website.  As for next year – I’m hoping to find funding to go to Iceland to work on a saga/storytelling collaboration.  I’d also love to go back to Jerez for a longer period, and work with a local organisation on a performance piece.  The spirit of adventure is certainly not dampened, despite my disability!

Further info: Lynne’s posts on the Peepal Tree Press website, and all about Closure, the short story anthology in which her work features.  And of course her own website at www.lynne-e-blackwood.com